A married lady took to social media to seek advice after cheating on husband with a long-term male friend following misunderstanding with husband.

The unidentified lady revealed she gave a long term male friend the opportunity to eat from her husband’s pot.

According to the lady, people rumored she was in a relationship with her best friend which was never true adding that, they were just ordinary good friends and nothing else.

She usually attend training with her bestie in UK since they were in the same field. Before leaving the house, she quarreled with her hubby.

After meeting her long term friend, she gave up and allowed him to dig the sweetness underneath.

It seems the young married girl has deeply regretted her actions and wants advice from the public. 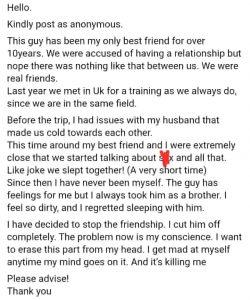 Balwinder Singh better known as Balwinder Safri is an Indian singer who lives in Birmingham, Canada. He was born on...

Khanyi Mbau has dramatically transformed her skin from black to white in a new bleaching scandal which changed her totally....

I know you have seen a lot of people posting Jesus on most social media platforms in the past hours...

During the Civil War, the Colgate family fled England and established in America. William's father, Robert Colgate, was a farmer....

Unlike any other girl would have prefer giving herself to "well to do men" for money, Sharon Mbabazi is working...

A little girl of 12 years surprised her elder sister who took her phone by chance only to listen to...

Who is Dane Rampe Partner (Girlfriend)?

May Ridts Partner (Boyfriend), is she Married, Dating or Divorced?