A group of Russian soldiers who used Ukrainian Military uniforms to attack Ukrainians caught by the Ukrainian military intelligence and unarmed.

In reports, Russian soldiers intestinally wore Ukrainian military uniforms to attack Ukraine nationals. In the images, the soldiers were seen lying head down, even in the war zone, Ukrainians did not kill their enemies. See Below…

Other Russian soldiers in their uniforms were also caught up by Ukrainian military, they are shown in the picture below. 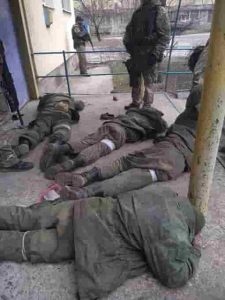 Israel Doctors on their way to Ukraine, Russian Soldiers confused on who to shoot

Meet Brent Renaud Journalist who died in Ukraine Russia War, Cause of Death

Did David Sassoli Die of Cancer? Know the actual cause of his Death